Last night.
More probably early this morning.
I dreamt I was dreaming, and in that dream was the Dali Lama. I awoke, in my dream, and met the Dali Lama.

I awoke, and wondered, can the Dali Lama be a woman?

I realized it does not matter.

I got out of bed and had a wonderful day.
Posted by Lori at 7:29 PM No comments: Links to this post

I had been wondering for awhile how to find someone I could work with in my personal growth practice.

I have found the person, or maybe they found me. 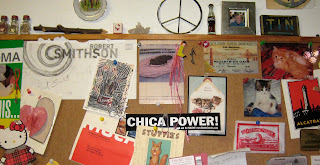 This person I have known my entire life, and today we started our work together, and it was fantastic.

There had been a relationship I was having a difficult time letting go of and even though I had not written this down as something I wanted to deal with she found it and we went there.

After, as I drove north for an appointment I noticed I was smiling, traffic was not bothering me, and I felt at ease with how my relationship with the estranged person is.

I have homework to do before my next session and I look forward to it. I already find the process energizing and inspiring.

I feel lucky to have my cousin connecting in my life in this way.

Maybe it's not luck at all.

Whatever it is I am grateful.

Thank you.
Posted by Lori at 7:41 PM No comments: Links to this post

While other parts of the country find temperatures cooling, leaves turning, and heaters getting tested.
We have

Temps 80-90F, and my skin thirsting for more moisturizer.

This year it feels like a change of season, maybe my body is starting to understand.

Posted by Lori at 7:49 PM No comments: Links to this post

Today I wondered why it is so important to me to be environmentally conscience, to be concerned about this earth and the creatures on it. 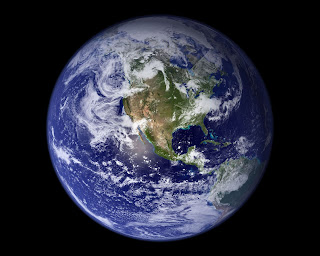 I am 52 years old. Maybe I’ll live to 80-90. In that 30-40 years it is doubtful that this world on earth will end. I have no kids, and therefore no grandchildren, so I need not worry about the state of this world on this earth.

And even so I am passionate about doing everything I can to live so that this earth, this world, can sustain.

Where does this come from? Is it from the same place as my firm belief that war and violence should never, under any circumstances, be an option?

It seems very weird. Why should I really care that much.

But I do, and I live with it and am very much engaged in it.

I guess it does not matter why, or where I come by this, it is just who I am.
Posted by Lori at 6:55 PM No comments: Links to this post

metal on the move

If I had stayed in the parking lot I would have missed it. The decision not to pay $13 turned out to be the right one.

Just as I pulled out I saw the metal being moved. I knew it was on its way to being installed. I will now know more about they yard sculpture.

Quickly I got behind the truck and followed it. 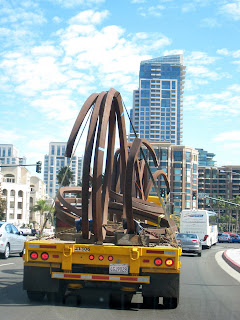 It stopped at Seaport Village. I could see some metal being installed on the grass at Embarcadero Marina Park North. 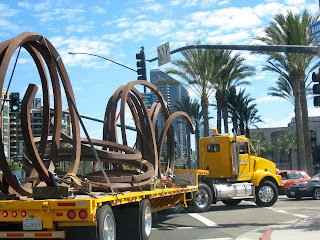 I made a u-turn; found a metered parking spot and starting working my way back towards the park.

When I got there one was installed and I saw a crane getting ready to install another. 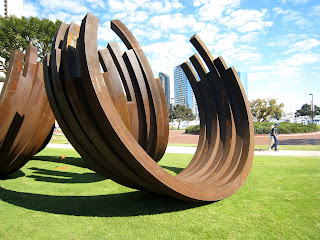 I found a woman who told me this was the work of Bernar Venet and the Port of San Diego has 8 of his sculptures for one year. 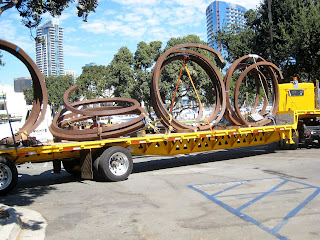 They will all be installed by Nov.

When I got home I found this was in conjunction with Scott White Contemporary and there would be an exhibit of some of Venet’s small pieces and drawing starting Nov 7. http://www.scottwhiteart.com/artists/venet.html

Come Nov there will be a Venet walking tour for me. 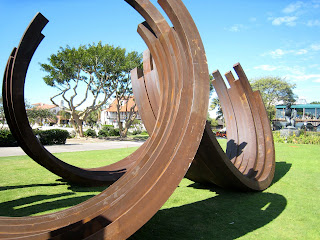 Once again, what a difference a day makes.

I am energized and inspired. 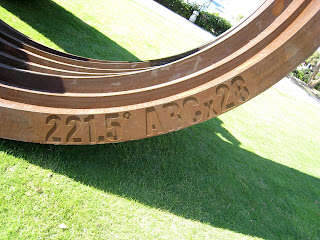 Posted by Lori at 6:04 PM No comments: Links to this post

Is it the dry warm weather, the smoked filled air, the Suzuki breaking down, school work to be done, home to be cleaned, cat’s eye to be checked, credit card to be paid, not much work on the calendar, payment for work done not received, food costing more?

I started off towards meeting the girls for the Thur night hike. Forgot my headlamp, but no big deal, the sky was clear, and the moon still quite large.

Traffic not bad until I got on 15 north and bam, just as swooped off the ramp the radio told me, Sig Alert, (http://en.wikipedia.org/wiki/Sig_Alert also known as a parking lot).

Apparently there were more than one, but the one concerning me was right now, right here, 15 north. Luckily I got off the freeway quickly and headed back home on surface streets. Let the girls know I would not make it.

Was this all a product of my day? Feeling exhausted, and for no physical reason.

Got home, went out and walked Florida Canyon. 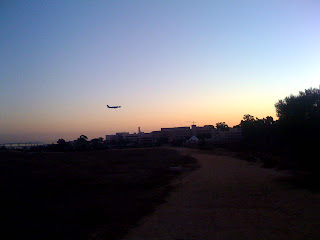 Today was not fun.

Tomorrow will be different and new.
Posted by Lori at 7:29 PM No comments: Links to this post

I find hand drafting difficult and frustrating.
This one floor plan I have drawn three times. The first time my dimensions were wrong, I read the notes wrong. Second time it was messy, then when I tried to fix the mess it got messier. I hope I do not have to make many changes after the instructor looks at it, because I fear I will mess it up.
I cannot stand using the 7m F mechanical lead pencil. Too often I just touch the page and the lead breaks.
I cannot seem to embrace learning this technique.
I had a difficult time learning CAD, but I remember enjoying learning it.
If only I had kept up with CAD. I do not think I remember much of it.
I have downloaded Google’s SketchUp.

It is so nice that there is a free program available. I will try it.
A trick I was told was to do the drawing on the computer and then trace it for that hand done look. 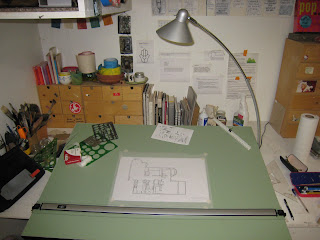 I really like that idea.
And I will get through this class, hand drafting, and hopefully I will pass, because I need to move forward and design.
Posted by Lori at 10:21 AM No comments: Links to this post

where is real change

It is getting increasingly hard to listen to the news about the so called economic disaster.

Millions, billions, of people living in poverty, and all I hear about is complaints and fear about losing.

Billions, millions, of people have nothing to lose.

When did people start working at jobs they hate so much that they have the need to want to make money from money so they can retire and leave the job they’ve been working at for so long, and apparently don’t like doing?

The economy needs to change; it has for a long time.

I fear the bail-outs of major corporations, banks and lending institutions around the world will not lead us to the change needed, and this is truly a shame, maybe even criminal. I hope there will not be those who end up making millions, or billions from this.

I am grateful for all I have and it is a lot, and if for some reason I loose all material processions, it will not be the end of the world. I know I can and will survive.

Posted by Lori at 10:47 AM No comments: Links to this post

I am really not sure about this hand drafting.
It is seriously stressing me out.

Today at the store I found the big bottle. 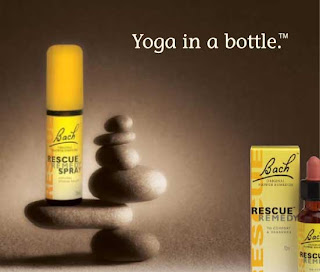 Not sure I can afford the amount I may need.

I will have to get back to my yoga/meditation practice, now.
Posted by Lori at 6:24 PM No comments: Links to this post

How nice it was to get outside and do a walk today.
The air was washed clean by the rain last night.
The temperature was a very comfortable 70F 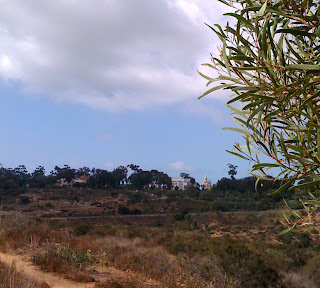 I came to the corner of State and Laurel where the funky building with the corner fenced in area are. 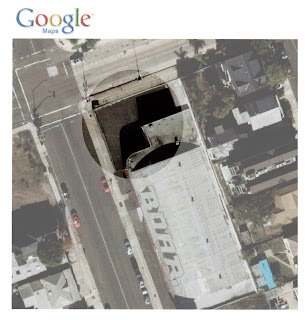 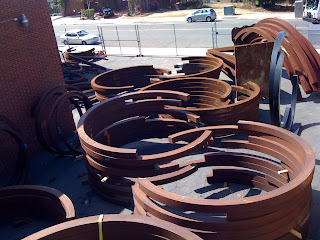 It must be a sculpture. 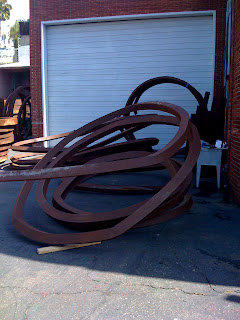 Had it been installed someplace? 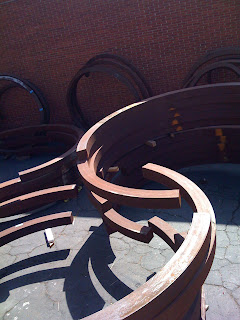 Is it waiting to be installed? 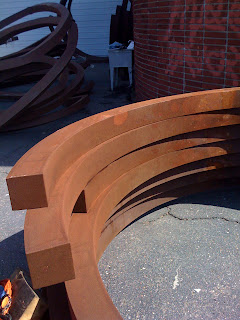 Whose sculpture is it? 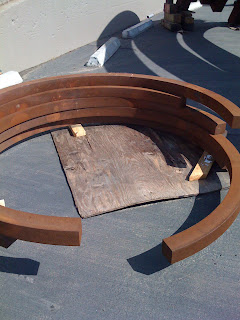 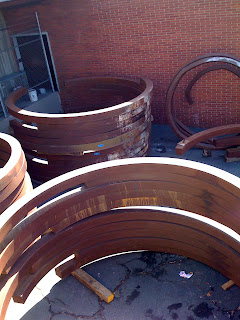 Posted by Lori at 3:36 PM No comments: Links to this post

talking to myself & notes

This blog is my internal dialogue. It is part of my writing practice which allows me the opportunity to pontificate to myself, thereby working things out (if only in my mind), and archiving.
Lori Lipsman
www.lorilipsman.com